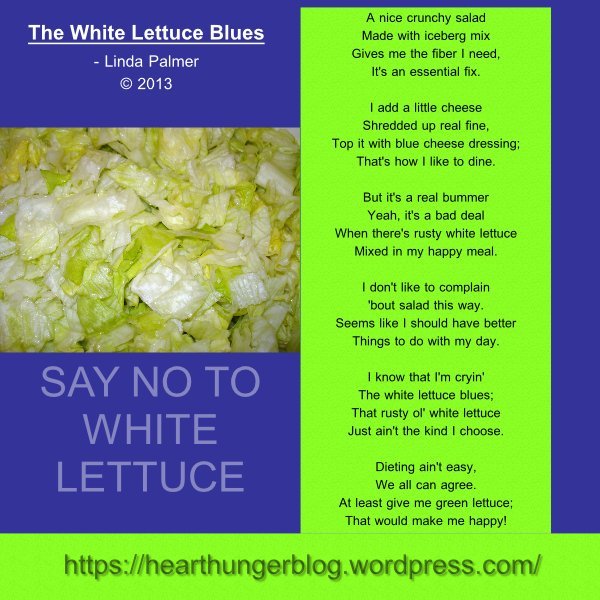 I’ve made the most extraordinary discovery! The more restricted my diet becomes, the more picky I get about my food! There was a time I just ate what was put before me whether it was fixed perfectly or not. I just mindlessly ate it. Those days are gone. I only get 1200 calories a day and I will not waste them on food that does not taste good.

If I’m at a restaurant and order a salad, or go to a salad bar, there had better be some green leafy lettuce in that bowl or they will hear about it. I try not to be rude, but really, people, does anyone like the white part of iceberg lettuce??? I don’t. It’s even worse if it is rusty and white!

When I pick out more of the lettuce than I eat, this is a problem and I don’t like it. I’m paying money for a green salad, not a white rusty salad.

That’s one reason I enjoy our local deli – Jason’s Deli. They not only offer the iceberg lettuce, but they have a large bowl of spinach as well. When I make a salad at home it is always with spinach! I never buy lettuce. I’m in heaven with a spinach salad with a little raspberry vinaigrette on top.

It’s been difficult to become a picky eater because I was raised by parents who lived through the great depression era. They knew what it was like to be poor and eat what was put before you and “like” it. My dad used to tell me about the lines they stood in to get a block of cheese. I learned that you use it until it’s used up – haste makes waste. Those values were passed on to me.

I still appreciate everything I have, don’t get me wrong, but now I recognize my likes and dislikes. I’m not a garbage disposal – I’m a person. I don’t have to eat whatever is put before me. In my mind – eating food that is not good for me or does not taste good – well… that haste makes WAIST. So…

I only get 1200 calories a day. Why should I eat anything I don’t really like?