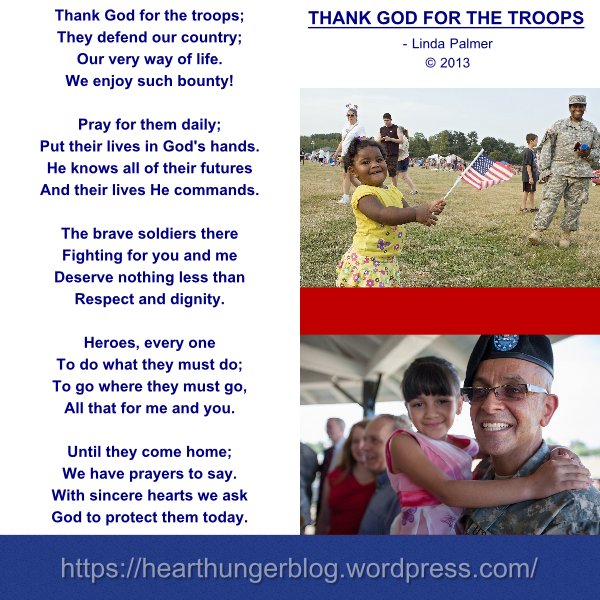 I’m so very thankful for the men and women who defend my freedom! Once in a while, usually around this time of year, I see a post on facebook about how the troops wearing helmets should earn more money for defending our country than a football player on a field wearing a helmet, defending a football. When I see that post I always “like” and “share” it.

This is not a political blog and I don’t want it to be political. I have to say that as an American citizen I am shocked and upset about the Veteran’s Administration scandal. Lately there have been so many scandals that I’ve gotten used to the term “scandal”. But this one is different. This one is personal.

How could they think something like this would not catch up to them? It’s obviously a last-ditch effort by an agency that is broken to begin with. In my humble opinion, they need to re-build the entire VA from the top down. Get rid of the ones running it now and start from scratch. Make it stronger and much more reliable than it has ever been. Our military personnel deserve nothing less than the best. We owe them that much.

Every day I pray for this nation. I pray for our country to turn back to God. Don’t we understand that there will be dire consequences if we don’t? Hello!

I am so blessed to be a citizen of America. I am doubly blessed to be a child of God. It is my prayer that we find a way to honor and care for our Veterans in a way that will show them how much they mean to us. It goes beyond politics to a more personal problem. Every Veteran, no matter what war they fought in, deserves the best this country can give them. That so many died waiting to be cared for is a tragedy and the VA should be ashamed of itself. 😦 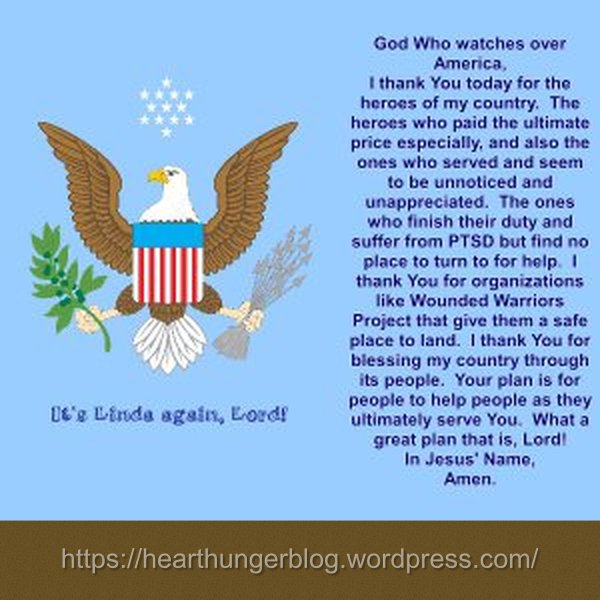 I PLEDGE ALLEGIANCE TO THE FLAG OF THE UNITED STATES OF AMERICA. AND TO THE REPUBLIC FOR WHICH IT STANDS, ONE NATION UNDER GOD INDIVISIBLE, WITH LIBERTY AND JUSTICE FOR ALL.

There are heroes among us and they are the ones who unselfishly gave of themselves to serve this great country. America would be in trouble for sure if it was not for their bravery and sacrifice. They gave time that they will never get back so that the rest of us can pursue our dreams and ambitions at home.

My dad was a veteran. Most of my uncles served in the military during WWII. Of course they were drafted and did not have a choice, but I know my family, and they would have gone willingly to serve their country.

Every gun that is made, every warship launched, every rocket fired signifies in the final sense, a theft from those who hunger and are not fed, those who are cold and are not clothed. This world in arms is not spending money alone. It is spending the sweat of its laborers, the genius of its scientists, the hopes of its children. This is not a way of life at all in any true sense. Under the clouds of war, it is humanity hanging on a cross of iron. – Dwight D. Eisenhower, speech, American Society of Newspaper Editors, 16 April 1953

Our American veterans deserve nothing less than honor and respect from the rest of us. Today I thank God for every one of them. The Veterans Day National Ceremony is held each year on November 11th at Arlington National Cemetery. It begins right at 11:00 a.m. with a wreath laying at the Tomb of the Unknowns and continues inside the Memorial Amphitheater with a parade of colors by various organizations and remarks from dignitaries. The ceremony honors and thanks all who served in the United States Armed Forces.

It is easy to take liberty for granted, when you have never had it taken from you. – Author unknown, sometimes attributed to M. Grundler

Thank you, veterans, for your service to America! May God richly bless you! 🙂