Today is the fourth Sunday of ADVENT.

I so want to know PEACE more than anything…  peace on earth, peace in families, peace in the workplace, peace in traffic, peace on social media.  I just want PEACE.  When did people forget how to agree to disagree without sparking a debate in the process with as much tact as a bull moose?  I’m just asking…

Is there hope for peace in our lifetime?  There is definitely HOPE for PEACE…  and the source of both HOPE and PEACE is Christ.  Apart from Him we are not able to live in peace and we won’t have hope.

Lucinda reminds us that the PEACE that God gave us will never run out.  Aren’t we thankful?

For so long we’ve seen photographs of stables and have just thought of the visual – I don’t know about you, but I never thought about the stench in the manger.  When I read this I thought, “I need to design this one, not with Advent candles, but with a photo of a Nativity scene.”  I wanted us to have the photo to look at as we think about just how lowly it was for the King of Kings to be born – there. 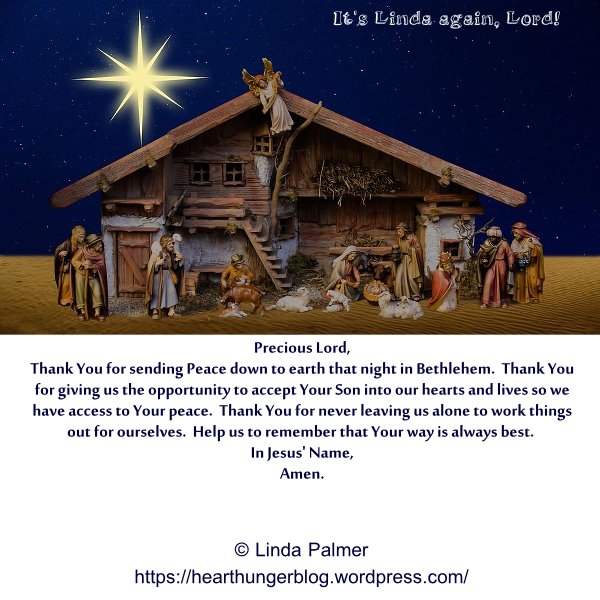 He came to bring us peace – it’s a peace that passes all human understanding.  If you try to explain it to a non-believer because they won’t get it.  They won’t grasp the concept of going through turmoil in life with God’s peace on the inside.  It will seem so strange and weird to them.  But to those of us who know the Lord – we know that peace, don’t we?  We know how God has brought us through rough patches in the past and we are confident that He won’t let us down now – or in the future!  I pray that as we go and tell others the good news of Christ, they will understand with spiritual eyes as we do.  🙂

After Jesus was born in Bethlehem in Judea, during the time of King Herod, Magi from the east came to Jerusalem and asked, “Where is the one who has been born king of the Jews? We saw his star when it rose and have come to worship him.”

When King Herod heard this he was disturbed, and all Jerusalem with him. When he had called together all the people’s chief priests and teachers of the law, he asked them where the Messiah was to be born. “In Bethlehem in Judea,” they replied, “for this is what the prophet has written:

“‘But you, Bethlehem, in the land of Judah,
are by no means least among the rulers of Judah;
for out of you will come a ruler
who will shepherd my people Israel.’”

Then Herod called the Magi secretly and found out from them the exact time the star had appeared.  He sent them to Bethlehem and said, “Go and search carefully for the child. As soon as you find him, report to me, so that I too may go and worship him.”

After they had heard the king, they went on their way, and the star they had seen when it rose went ahead of them until it stopped over the place where the child was.  When they saw the star, they were overjoyed. On coming to the house, they saw the child with his mother Mary, and they bowed down and worshiped him. Then they opened their treasures and presented him with gifts of gold, frankincense and myrrh. And having been warned in a dream not to go back to Herod, they returned to their country by another route.

O Little Town of Bethlehem was written by Phillips Brooks.  He also wrote two books – one called The Joy of Preaching and another called The Consolations of God.

Brooks actually took a trip to Bethlehem and walked around trying to imagine what that night must have been like.  He didn’t write the carol in Bethlehem; in fact, he waited three years and was back in the United States when he began writing the song.  He must have really given the details a lot of thought.

He records in his diary,

“Before dark we rode out of town to the field where the shepherds saw the star. It is a fenced piece of ground with a cave in it, in which, strangely enough, they put the shepherds. Somewhere in those fields we rode through, the shepherds must have been, as we passed, still keeping watch over their flocks. I was standing in the old church in Bethlehem, close to the spot where Jesus was born, and the whole church was ringing hour after hour with the splendid hymns of praise to God; how again and again it seemed as if I could hear voices I know well, telling each other of the Savior’s birth.”

And so the carol O Little Town of Bethlehem was written.

The best news is that Christ was born for everyone!  He came to earth for all – !

I love this poem from Lucinda’s devotional book Coffee with Jesus.  I’m so glad that Jesus loves everyone regardless of any label you may want to mention.  He doesn’t see the labels, He just sees each soul individually.  🙂

Today we are to pray for joy to share with others, peace in our hearts and to thank God for His amazing grace. 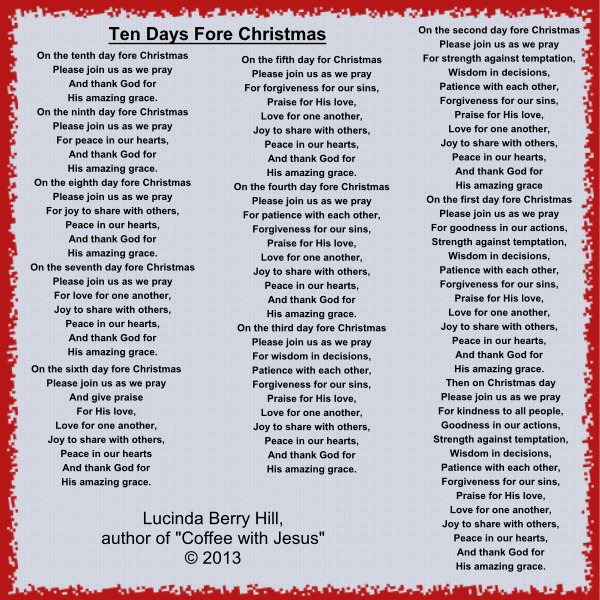 Joy and happiness are often used to mean the same thing, but happiness is dependent on conditions.  God’s joy is a constant that sustains us no matter what the circumstance or issue.

May God grant us joy to share with others – share with them that Christ was born in Bethlehem and He is the reason for the season!  What song comes to mind?  Hmm…  how about this one –

We pray that You will instill Your joy, that does not depend upon circumstance, in our hearts – that we may share with others – share You, and Your love, grace, mercy and abiding peace and joy.  Thank You, Lord for hearing our prayer.  Thank You for providing a way for us to have everlasting life in heaven with You.  Thank You for forgiving our sins.  Thank You for forgetting our transgressions and giving us another chance – time and time again.

Joy to share with others – and bow before the Christ Child.  https://youtu.be/bqjzpWYFJfc

Before the birth of Christ, there was nothing to bridge the gap between God and man.  Have you ever wondered why we pray IN JESUS’ NAME – ???  It’s because we pray to God – through Jesus.  Jesus is the reason we will be accepted into heaven with God.  When God looks at us, He sees Jesus.  We have an indelible mark on us once we belong to God through Jesus.

May God bless you with an extra shot of joy this Christmas season…  to share with others!  🙂

Awe…  today is the tenth day ‘fore Christmas – and what does Lucinda’s poem tell us to do???  We are to THANK GOD FOR HIS AMAZING GRACE.  We’ve talked a little about being thankful already, but to thank God for His grace is the best thankfulness of all.

What is your favorite song about God’s grace?  The most popular is AMAZING GRACE.  I think it’s probably also the oldest, which goes to show that traditional hymns are timeless.  So many artists have recorded it – but my favorite will always be Judy Collins.  https://youtu.be/CDdvReNKKuk

He looked beyond my fault and saw my need – and I praise Him for that.  https://youtu.be/5JFQNAJTRXE

My friend used to tell me she wished she could have been a bird in a tree in Bethlehem on that special night.  I asked her what kind of bird she would have been – and she laughed and said she didn’t know what kind of birds live in that part of the world – but she was sure there were birds there – and she wanted to be one of them.  It’s funny that some conversations you never forget – and others you can’t remember.  That’s one that will stay with me for the duration.

Let’s be thankful for God’s Amazing Grace.  Nothing you are doing there is more important than seeking Christ, God’s only Son.  All of your shopping and baking and planning and decorating can wait until you have taken the time to thank God for sending Jesus as He did – born in a manger for all of humanity.  🙂