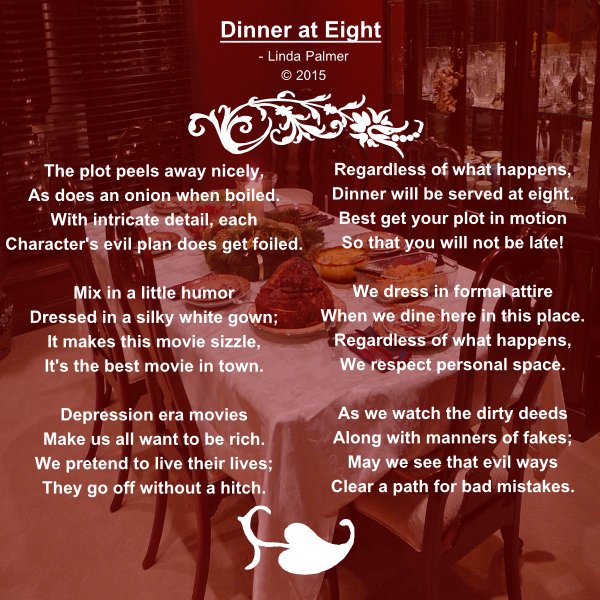 Call me a square…  I just don’t care!  I love old movies!  Is it so surprising that one who wears vintage clothing and does not dig modern movies with profanity and other non-important additions should enjoy a flick from more innocent times?

Even though this movie was released nearly 30 years before I was born, my favorite old flick came out on this day in 1933 and is called “Dinner at Eight”.   I hear everyone rave on about how it’s such a great comedy – and maybe I’m missing something, but I don’t see it as a comedy.  It’s more of a drama to be sure since some of the subject matter includes the dawn of the talkies, divorce, aging, fading careers, alcoholism, class conflict, economic pressures, infidelity, love, financial ruin and suicide.

Based on a very successful play, I’ve gone to more than one performance at live theatre here in Wichita, but there’s just something about the movie version that draws me in.  My favorite character is Kitty.

Jean Harlow, stylishly coiffured from her lovely gowns to her platinum blonde hair, plays the role of “Kitty” with absolute perfection.  Kitty is often propped up in bed, wearing a silky white negligée, eating chocolates that she spits out when finding one she doesn’t like (I never have that problem, do you?)  She resorts to both baby talk and brassy insults in the same sentence (how does she do that?) She and her husband, Packard are always bickering.  Maybe that’s why people think it’s a comedy – she is sort of funny.

My favorite part is when Packard lets her know he doesn’t want to go to the dinner and promptly tells her:

I’m enamored with this era and am convinced I was born too late!  Then I am quick to reconsider when I realize that 1933 was smack dab in the middle of the depression era.  God spared me from that.  My folks lived through it – but all I got were stories from them.  It didn’t sound like it was much fun – at all.  Then there was WWII – it just kept getting more fun, didn’t it?

Dinner at Eight is an old classic that should be on everyone’s DVD shelf.  It’s cute and quirky, but still a little edgy for its time.  Wink!  😉