Of all the people in the world, God chose to personally care for Noah and his family.  If that doesn’t warm your heart, the wood in your heart’s stove is wet.

Noah was a good man who placed all his faith and trust in God.  He raised his family to believe in God and His law.  It is worth it to follow the Lord, and the story of Noah supports that truth.  God led Noah and his family and saved them from the flood.  He also got male and female animals on board the ark to save them and see that they reproduced so life would go on after the flood.   I don’t know of a person who would have done things so creatively!  God works out all our problems in similar ways, doesn’t He?  I love my LORD’S CREATIVITY!

Do you suppose some of the animals who boarded the ark at first got bored and said, “God, shut the door!” – ???  How funny!  I have so many questions, like – why did flies and skeeters have to survive?  Why did rats and spiders have to survive?  Sigh…  I don’t think we’ll ever get an answer to those questions.

It’s a lesson about trusting God no matter what.  Every family should build and ark for themselves, secure in God’s Word and His way.

I like to think that God is protecting me and my family just as He protected Noah and His family.  As we follow Him, He blesses us in such marvelous ways!

And finally, here’s something that I’ll bet you never thought about – LOL! 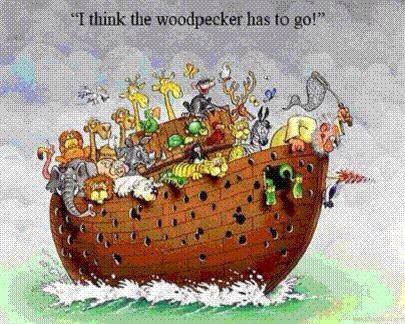 Have a wonderful day!  🙂

The RMS Titanic was an Olympic-class passenger liner owned by British shipping company White Star Line and built at the Harland and Wolff shipyard in Belfast, United Kingdom. For her time, she was the largest passenger steamship in the world.

On the night of April 14, 1912, during the ship’s maiden voyage, Titanic hit an iceberg and sank two hours and forty minutes later, early on 15 April 1912. The sinking resulted in the deaths of 1,517 people, making it one of the most deadly peacetime maritime disasters in history. The high casualty rate was due in part to the fact that, although complying with the regulations of the time, the ship did not carry enough lifeboats for everyone aboard. The ship had a total lifeboat capacity of 1,178 people, although her capacity was 3,547. A disproportionate number of men died due to the women-and-children-first protocol that was followed.

The Titanic used some of the most advanced technology available at the time and was, after the sinking, popularly described as “unsinkable”. It was a great shock to many that, despite the extensive safety features and experienced crew, the Titanic sank. The frenzy on the part of the media about Titanic‘s famous victims, the legends about the sinking, the resulting changes to maritime law, and the discovery of the wreck have contributed to the continuing interest in, and notoriety of, the Titanic.

I’ve seen many movies about the Titanic, but I believe the story gets more grand with each depiction, as most historic events do.  I’m reminded of a movie called “The Unsinkable Molly Brown” with Debbie Reynolds.  If you aren’t fond of musicals, it might not be one you would enjoy.

The sinking of the Titanic does remind us that sometimes the best efforts of those who are professed experts are not always successful, while the efforts of the professed ignorant with God’s guidance can be quite successful.

Noah’s Ark, according to chapters 6-9 of the Book of Genesis, was a large vessel built by Noah, at God’s command. It saved Noah, his family, and the world’s animals from a great flood.

The Genesis narrative tells how God, grieved by sin on the Earth, decided to destroy all life with a flood. However, Noah, a righteous man who “found grace in the eyes of God”, was instructed to prepare for this flood by building an ark and to retreat to it with his family and with male and female representatives of various animals. As the flood waters rose, those sheltered inside the Ark survived as the rest of humanity and animal life perished. As the waters reached their height, God “remembered Noah”, the waters abated, and dry land reappeared. Noah and the animals left the Ark, Noah offered sacrifice, and God vowed never again to destroy the Earth in this way.

I want to live by faith in God and let Him help me build my life, don’t you?   🙂